A new week, a new batch of books–both books finished and being read. Today is…

Since today is Columbus Day and a three-day weekend, I will not be updating the reading tallies and the SpinCams until Tuesday.

{Wherein we share what books we have read in the past week.}

{Wherein we share the titles we are currently reading.}

Every year in Quill, thirteen-year-olds are sorted into categories: the strong, intelligent Wanteds go to university, and the artistic Unwanteds are sent to their deaths

Thirteen-year-old Alex tries his hardest to be stoic when his fate is announced as Unwanted, even while leaving behind his twin, Aaron, a Wanted. Upon arrival at the destination where he expected to be eliminated, however, Alex discovers a stunning secret–behind the mirage of the “death farm” there is instead a place called Artime.

In Artime, each child is taught to cultivate their creative abilities and learn how to use them magically, weaving spells through paintbrushes and musical instruments. Everything Alex has ever known changes before his eyes, and it’s a wondrous transformation.

But it’s a rare, unique occurence for twins to be separated between Wanted and Unwanted, and as Alex and Aaron’s bond stretches across their separation, a threat arises for the survival of Artime that will pit brother against brother in an ultimate, magical battle.

My Comment: Though the magic battles lost me a little bit (what doesn’t lose to magic?), there were some clever twists and turns in this book that kept me reading. Though not quite a dystopian book–more a straight-up fantasy… I think…) I’m fascinated by these books with overpowering governments–governments and leaders that are caught in the conflict of trying to make difficult decisions to keep their people safe… which tends to develop dictatorial tendencies. Hmmm… I think I sense a literary essay coming on.

This is not a sixth-grade type book. Sheesh. It’s brutal. But so good. You can see how Mrs. Bick responded to my comment/question:

Shadows is the sequel to:

Have I mentioned what a thrill it is to be their first reader cr-a-a-a-a-a-ck open a just-purchased-by-the-public-library book? Shadows was one of three this week: 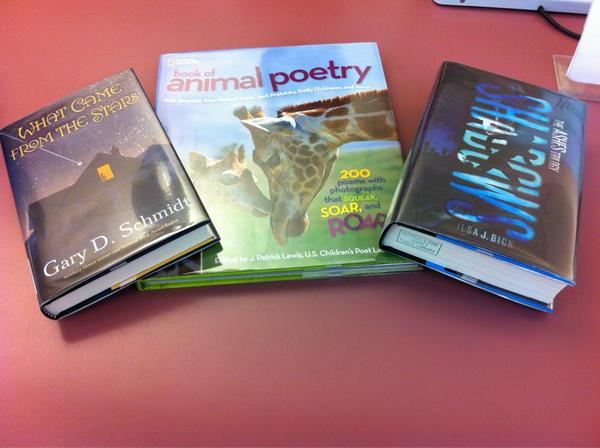 Some of the books A Class is reading:
A class WHAT ARE YOU READING SpinCam
B Class Books:
Click here for B Class SpinCam
C Class Books:
Class C SpinCam

Sooo…… What are YOU reading??? Please leave a comment and let me know.

And finally, a trailer:
Here is another trailer for Bigger than a Breadbox made on Animoto.
Thanks,
David Etkin