Guess what today is!

& the titles we are currently reading.} 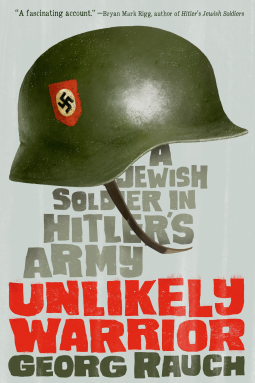 I only think about WWII from the point of view of America and Jews and the French, all who were fighting against—or victims of—the evil Nazis and their quest to take over Europe. They had to have enough Lebensraum, or Living Space, for their perfect Aryan race, right? I grew up hating the Nazis and their violent ways.

How interesting to read a memoir from the point of view of a German soldier. Yes, a reluctant one, but still—he was one of the bad guys. Rauch was a communications specialist thrown right into the middle of the Germans’ war against Russia. Through his retelling of his experiences, many told through letters he wrote home to his Mutti (Mother) and father, I was able to get a feel for the indifference of war. It doesn’t matter what side one was on, to some extent. Most soldiers were forced into battle and lived the nightmare of trench warfare; freezing temperatures; inadequate clothing, housing, and nourishment; death of comrades and friends. Soldiers fight because they are ordered to do so. Our side is the same.

Rauch approaches the war with a poet’s eye. Through turns of hard luck and surprising fortune, he was able to survive the war. In his author’s note at the end, he calls this an “anti war book featuring a nonhero.” That’s a precise description of what awaits you.

Rauch passed in 2006. This book, originally written in German, was translated by his wife, Phyllis. In his life in America and Mexico, Rauch was an artist. Here are a few pictures of him with his work, courtesy of http://www.losdosmexico.com:

How many books have my students read? What are they reading?

Check out the reading totals and the handy SpinCam!

Click on each picture to see a 360º view of students and their books:

[this will be updated at the end of the day]

Parents are invited to participate in our journey as well.

For every parent who leaves a comment on TODAY’S POST with what you’re reading, I’ll give your child a BUSTED ticket…

Let’s have a look back to check for parent comments.

My 6th grader got this with her birthday money and raved about it. Needless to say, it’s on my list. Sounds hysterical!

Overview from Barnes and Noble

This smart and funny twist on Freaky Friday is perfect for fans of Wendy Mass, Jerry Spinelli, and Jon Scieszka.
With one random wish, Jack and Ellie are living life in each other’s shoes. He’s her. And she’s him. ELLIE assumed popular guys didn’t worry about body image, being perfect, or talking to girls, but acting like you’re cool with everything is tougher than it looks.JACK thought girls had it easy—no fights with bullies, no demanding dads, no power plays—but facing mean girls at sleepovers and getting grilled about your period is way harder than taking a hit to the face at sports practice.
Now they’re dealing with each other’s middle school dramas—locker room teasing, cliques, video game battles, bra shopping, and a slew of hilariously awkward moments—until theyhopefully switch back! Told in both Jack’s and Ellie’s voices, The Swap offers a fresh and honest take on tween friendship, all while exploring more serious themes of family, loss, empathy, and what it really means to be yourself. And as Jon Scieszka says, it’s “seriously, truly, fearlessly funny!”

1 thought on “11.3 It’s Monday! What are you reading? #UnlikelyWarrior”