I’ll be writing more about this book for next week’s blog post. Salt to the Sea will be born on  Tuesday, February 9th.

ABOUT SALT TO THE SEA from hypable.com

In 1945, World War II is drawing to a close in East Prussia, and thousands of refugees are on a desperate trek toward freedom, almost all of them with something to hide. Among them are Joana, Emilia, and Florian, whose paths converge en route to the ship that promises salvation, the Wilhelm Gustloff. Forced by circumstance to unite, the three find their strength, courage, and trust in each other tested with each step closer toward safety.

Just when it seems freedom is within their grasp, tragedy strikes. Not country, nor culture, nor status matter as all ten thousand people aboard must fight for the same thing: survival.

If that looks good, I’d also highly recommend Mrs. Sepetys’ first novel, which can be seen as a companion to Salt to the Sea. 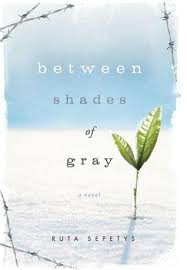 In 1941, fifteen-year-old Lina is preparing for art school, first dates, and all that summer has to offer. But one night, the Soviet secret police barge violently into her home, deporting her along with her mother and younger brother. They are being sent to Siberia. Lina’s father has been separated from the family and sentenced to death in a prison camp. All is lost.

Lina fights for her life, fearless, vowing that if she survives she will honor her family, and the thousands like hers, by documenting their experience in her art and writing. She risks everything to use her art as messages, hoping they will make their way to her father’s prison camp to let him know they are still alive.

It is a long and harrowing journey, and it is only their incredible strength, love, and hope that pull Lina and her family through each day. But will love be enough to keep them alive?

Between Shades of Gray is a riveting novel that steals your breath, captures your heart, and reveals the miraculous nature of the human spirit.