When sixteen-year-old Ellie Baum accidentally time-travels via red balloon to 1988 East Berlin, she’s caught up in a conspiracy of history and magic. She meets members of an underground guild in East Berlin who use balloons and magic to help people escape over the Wall—but even to the balloon makers, Ellie’s time travel is a mystery. When it becomes clear that someone is using dark magic to change history, Ellie must risk everything—including her only way home—to stop the process.

Magic balloons… who’d have thought that a writer could make it so interesting? But add some history (the Berlin Wall in East Berlin shortly before it fell) and a little romance and you’ve got a recipe for a captivating ride.

This book highlights a fascinating time in history. Did you know… (borrowed from the History Channel):

In all, at least 171 people were killed trying to get over, under or around the Berlin Wall. Escape from East Germany was not impossible, however: From 1961 until the wall came down in 1989, more than 5,000 East Germans (including some 600 border guards) managed to cross the border by jumping out of windows adjacent to the wall, climbing over the barbed wire, flying in hot air balloons, crawling through the sewers and driving through unfortified parts of the wall at high speeds. 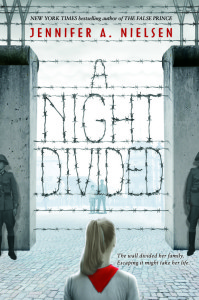 With the rise of the Berlin Wall, twelve-year-old Gerta finds her family divided overnight. She, her mother, and her brother Fritz live on the eastern side, controlled by the Soviets. Her father and middle brother, who had gone west in search of work, cannot return home. Gerta knows it is dangerous to watch the wall, to think forbidden thoughts of freedom, yet she can’t help herself. She sees the East German soldiers with their guns trained on their own citizens; she, her family, her neighbors and friends are prisoners in their own city.

But one day, while on her way to school, Gerta spots her father on a viewing platform on the western side, pantomiming a peculiar dance. Then, when she receives a mysterious drawing, Gerta puts two and two together and concludes that her father wants Gerta and Fritz to tunnel beneath the wall, out of East Berlin. However, if they are caught, the consequences will be deadly. No one can be trusted. Will Gerta and her family find their way to freedom?