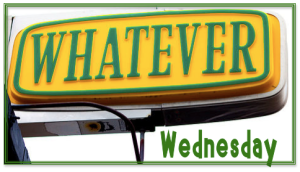 We just wrapped up our poetry unit.

Poetry is hiding everywhere. And it isn’t always happy.

I was hit with a poem on the way to work the other day—I drove by a dead Canada Goose in the middle of a very busy road. All the cars were swerving around it. And then I saw… well, here’s the poem. See for yourself:

Far from flying in a V

amidst the cacophony of honking—

Far from gliding in

the currents of his southbound comrades—

…He lies in the median of

cars in front of me, hourglassing

their way around the large skydweller,

by the dash-dash-dash of the

at this majestic flyer, now grounded.

Movement on the side of the road

and I see his mate—a statue—

on the side of the road,

Her ebony neck bent into a question mark.

Never one to let a good idea die too quickly, I found out there is a LOCAL 5K that is raising funds for wells in Sierra Leone, Africa. After reading A Long Walk to Water,I know a bunch of students wanted to run last weekend, but Rochester was too far. This might be within biking distance for some of my students as it starts on the UB Bike Path near North Campus. If 10 of my students register to run/walk, I will join them. Sooo…. who’s in???

Here is the site and information: (Click for registration information)

As of October 2012, over 60 wells have been funded, 41 of these are dug giving clean water to thousands.

In March 2012, we opened a home for orphaned and impoverished children. 23 children are living in the home.

And here is your 2013 NCAA BookBracket! 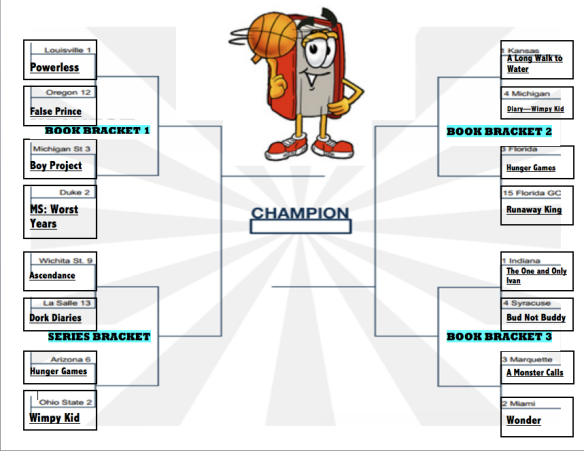 {You can click on the picture to enlarge it.}

We ranked each book by how many votes it received from AlphaTeam and Team Possible. The number of votes decided the book’s/series’ seed (or ranking). We assigned each book/series to a comparably seeded team in the NCAA Sweet 16.

So: If a team wins, the book it represents will move on. EXAMPLE: At 7:15 on Thursday, March 28, #3 Marquette will play #2 Miami. Bookwise, this means that A Monster Calls is playing Wonder. If Marquette wins, A Monster Calls will move on in the bracket to play the winner of Indiana (The One and Only Ivan) and Syracuse (Bud, Not Buddy). If Miami wins, Wonder moves on.

And so it will go until we make it to the championship book game on Monday, April 8th.

Check back on Tuesday for an updated BookBracket after all the weekend’s action.

Enjoy the tournament–and may the best book win!

I’m currently reading aloud A Long Walk to Water by Linda Sue Park. It’s a Battle book…
and it fit right in with world awareness for World Read Aloud Day… and I couldn’t read it and not share it… and the kids are hooked. While dealing largely with the plight of the Lost Boys of Sudan, it is also a book about the water crisis in Africa. It’s scaryeyeopeningbreathtakinghorizonexpanding. (Check out the blog page I set up.)

And then I see that my friend and his organization, Ugandan Water Project–an organization that helps provide clean, safe drinking water to African villlages–is doing a fundraiser run.

And I hate running, but I kind of want to do it.

Does anyone want to join me? Sponsor me? It would be SO cool to have some students sign up and run along with their slow, “old” teacher in Rochester to raise money and awareness for this cause.

Here is a picture of my buddy James from the site and a couple cool videos so you can see part of what they’re all about. And hey–Let me know.

A great video of our WRAD13 experience. The pictures and the student comments at the end say it all:

We 6th grade ELA teachers are gearing up for poetry upon our return from February break. Some things we’re looking at:

Yes, this is poetry:

[I got to watch the announcement LIVE with my per 5-6 class.]

Congratulations to us readers who get to enjoy this fabulous book.

How did this come about? I sent out a little Tweet: 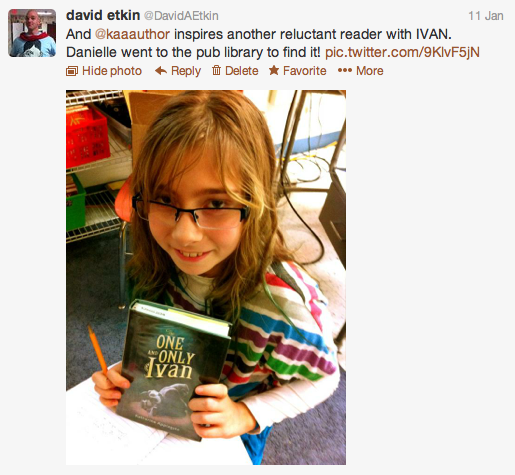 [Danielle was one of the 41 students who signed up to read IVAN after watching the trailer. She couldn’t wait to get a classroom copy. In fact, a few kids have gone out to purchase their own.]

…then messages me later to ask if she could send Danielle a signed copy. I almost fell off my seat.

When Danielle opened the package, I took some pictures and sent one along to Mrs. A. She responded quickly:

No, Mrs. Applegate. You made my day. And Danielle’s. And inspired the rest of the students who now see how kind and real authors are. You’ve made fans for life.

"The ultimate measure of a man is not where he stands in moments of comfort and convenience, but where he stands at times of challenge and controversy. The true neighbor will risk his position, his prestige and even his life for the welfare of others." —Strength to Love
Big news: we will be welcoming a new dog to the Etkin home. He’s a rescue from a puppy mill and we’ll be picking him up on Saturday. No name yet, but we’re brainstorming.
This reminds me of many of the themes my students have developed for their novels. Friendship is tricky, isn’t it? My fave friendship quote comes from Avi’s CRISPIN: “Friendships, like wheat, takes a season to grow.” @abramskids ・・・ Food for thought as we enter a new year. ​. ​. ​. ​#TheLastHuman #LastHumanBook #LeeBacon #friendshipquotes #bookquotes #friendshiprules #newyearsresolution #FridayFeeling #scifi #mglit #kidlit
Already halfway through this one by @annbradenbooks after just starting last night. Zoey is sticking with me when I put her away. . Second book in a row on the topic of poverty. Lots to think about.