Few things can draw a reader to a new book like a book trailer can. Each Friday I will endeavor to bring a couple to you—some new or recent, some teasers of upcoming books, and a few “classics”. Get the popcorn ready. 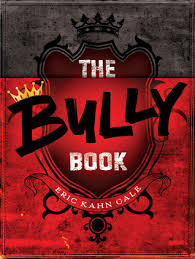 The rules governing sixth grade are often a mystery, but for Eric Haskins, it’s a mystery he needs to solve, and fast. He’s a normal, average kid, until sixth grade starts. For some inexplicable reason, the class bully and his pack make Eric the Grunt. Even his best friend since first grade turns on him. Eric can’t figure out why he’s the grunt until he hears about the Bully Book, a mysterious guide with shocking insights about the Bully’s M.O.

Jack’s mom is gone, leaving him all alone on a campsite in Maine. Can he find his way back to Boston before the authorities realize what happened?

Ever since Jack can remember, his mom has been unpredictable, sometimes loving and fun, other times caught in a whirlwind of energy and “spinning” wildly until it’s over. But Jack never thought his mom would take off during the night and leave him at a campground in Acadia National Park, with no way to reach her and barely enough money for food. Any other kid would report his mom gone, but Jack knows by now that he needs to figure things out for himself – starting with how to get from the backwoods of Maine to his home in Boston before DSS catches on. With nothing but a small toy elephant to keep him company, Jack begins the long journey south, a journey that will test his wits and his loyalties – and his trust that he may be part of a larger herd after all.

The dead are up and walking, and the Gentleman is at the door…

Featuring a kid hero, time travel, and otherworld portals in unexpected places (maybe there are monsters under your bed), The Dead Gentleman is a wild ride between parallel New York City timestreams—1901 and today. Eleven-year-old Tommy Learner is a street orphan and an unlikely protege to the Explorers, a secret group dedicated to exploring portals, the hidden doorways to other worlds. But while investigating an attercop (man-eating spider) in the basement of an old hotel, Tommy is betrayed and trapped. And it’s then that his world collides with that of modern-day Jezebel Lemon, who—until the day she decides to explore her building’s basement—had no bigger worries than homework and boys.

Now, Jezebel and Tommy must thwart the Dead Gentleman – a legendary villain whose last unconquered world is our own planet Earth, where the dead stay dead. Until now. Can two kids put an end to this ancient evil and his legions of Gravewalkers?

Percy Jackson meets Indiana Jones in the New York Times bestselling epic adventure Seven Wonders! The Colossus Rises is the first book in a seven-book series. This first installment chronicles the story of Jack McKinley, an ordinary kid with an extraordinary problem. In a few months, he’s going to die—unless he finds seven magic Loculi that have been hidden in the Seven Wonders of the Ancient World.

Rick Riordan calls Seven Wonders “a high-octane mix of modern adventure and ancient secrets. The Colossus Rises is Lerangis’s most gripping work yet. Young readers will love this story. I can’t wait to see what’s next in the Seven Wonders series!”

The day after thirteen-year-old Jack McKinley is told he has six months to live, he awakens on a mysterious island, where a secret organization promises to save his life—with one condition. Jack and three other kids must lead a mission to retrieve seven lost magical Loculi, which can save their lives only when combined together correctly. The challenge: The Loculi have been missing for a thousand years, lost amongst the ruins and relics of the Seven Wonders of the Ancient World. With no one else to turn to and no escape in sight, the four kids have no choice but to undertake the quest. First stop: the Colossus of Rhodes, where they realize that there’s way more than just their lives at stake.