I wouldn’t have picked it just a few years ago, but historical fiction (HF) is quickly climbing the ranks of my favorite genres.

For me, the thrill of HF is the way I can cross reference real-world events with the fictitious events of the story. History is the canvas of rich backstory upon which the vivid strokes of the author’s imagination are cast. It is up to the reader to dust off that canvas.

I’ve recently finished Dead End in Norvelt which is also historical fiction, taking place in small-town PA during the early 1960s. (Check out my conversations with Mr. Peterson: #1, #2, and #3. The final conversation is coming soon…) Towards the end of the book, Jack mentions that Marilyn Monroe died “yesterday”. A little research tells me that Monroe died on August 5, 1962, which would mean that this particular part of the story was taking place exactly on August 6th, 1962. Though her death is tragic, being able to research that tidbit and put a “time stamp” on the book thrills me.

I just finished the beautifully written…

…by Christopher Paul Curtis. I hid in the man cave and refused to come up until I read the last word of this historical fiction. It was an easy accomplishment with writing like Curtis’.

One of my favorite aspects of the book are the early references to the boxing match between Joe Louis and Max Schmeling.

The black community of 1936 had so much riding on the first meeting between Louis–who they saw as their representative in an unfair and largely racist America–and the “evil” German Nazi Max Schmeling. In the book, everyone is pumped for the match. It is all that is talked about for weeks leading up to the actual event on June 19th. Even the library has made a display in Louis’ honor. Deza, the main character, doesn’t get what the big deal is. But she still joins her family as they gather with many others in the barbershop to listen to the fight. We listen as the families are silenced and their hopes are dashed. We are with her as she walks home in the throes of depression after Schmeling knocks out the Brown Bomber in the 12th round. The silence is broken only by the scuffling feet and the cries of heart-broken children.

This really happened. (I’d recommend watching at least a little of the beginning, but if you then want to jump to the end, I’d recommend picking it up at about minute 21.)

That is what Deza and her family were listening to that night. I can hear it with them. I am there in the barbershop, head in hands as my hero is laid on the canvas.

This is what historical fiction can do.

The story of Joe Louis and Max Schmeling doesn’t end there. As my students and I read in Matt de la Peña’s book… 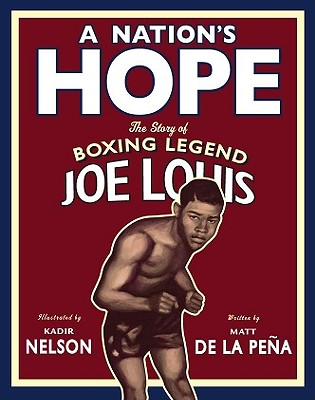 …there was a rematch in 1938. WWII was looming. The Nazis were growing ever stronger and the rants of white supremacy and German power were ringing throughout Europe and resounding across the globe.

This book, with breathtaking paintings by Kadir Nelson, tells the full story of Joe Louis’ life–starting with the Louis v. Schmeling rematch, circling back to Joe’s beginnings and his crushing loss to Max in 1936, before finally resuming with his victory.

Here are a couple paintings from the book…

…and the actual fight:

Because The Mighty Miss Malone is historical fiction, I can imagine soon listening with the Malone family to the Brown Bomber’s annihilation of Schmeling in this second bout. It’s fun to visualize the partying and celebration and pride that Louis’ redemptive victory will bring to the Malone family and their community.

The Louis vs. Schmeling story doesn’t end there. As Curtis writes in his Afterword:

As the years went by, for many people the fight became a symbol of certain aspects of the human condition. In particular, it showed that almost nothing falls into well-defined categories of good and evil. While Max Schmeling was reviled at the time, he was, as we all are, a complex person. He never was a member of the Nazi Party, something rare in Germany for someone of his stature and fame, and mostly resisted Hitler’s attempts to paint him as an Aryan superman.

The men developed a true friendship, and Schmeling would make an annual trip from Germany to see Louis… Louis respected Schmeling so much that he requested that Schmeling be a pallbearer at his funeral.

History is a living, complex beast, isn’t it?

For more reading and listening on Louis vs. Schmeling, try:

The Fight of the Century: Louis vs. Schmeling

‘Brown Bomber’ was a hero to all
By Larry Schwartz
Special to ESPN.com